(October 21, 2022) - Long-awaited "A Night Of Worship With The Brooklyn Tabernacle" Arrives Today 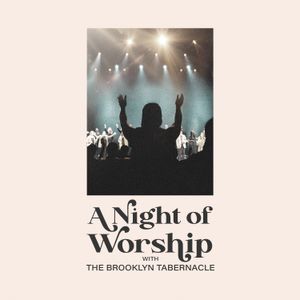 Inaugurating a highly anticipated new season for the beloved multi-GRAMMY® Award-winning The Brooklyn Tabernacle, A Night of Worship with The Brooklyn Tabernacle is available today at all retail and digital music outlets worldwide. The world-renowned ensemble’s first new recording in more than four years also marks their debut with StowTown Worship, an imprint of powerhouse Gospel label StowTown Records.

“After almost a year-and-a-half of being away from each other in person, it was amazing to get back together to worship, pray and sing for the Lord,” shares Carol Cymbala of the new recording. “A lot changed in Brooklyn during the pandemic, and the need is even greater now to shine our light for Jesus. Seasons change, but God remains faithful. Many have left Brooklyn and relocated due to the terrible COVID spikes, increased crime, and deterioration of the city, but the Lord has once again raised up a faithful group of devoted singers who want to spread the Gospel and glorify God.”

Album opener “There’s Nothing Better” (feat. TaRanda Greene and Brad Hudson) plots a joyful course for a range of impassioned anthems proclaiming God’s goodness, faithfulness and worthiness to be praised. The energetic Alvin Slaughter-led “For My Good” further fuels an atmosphere of authentic worship, while group favorite “He’s Been Faithful" (feat. Greene) also stands among the project's many highlights.

“At the lowest point in my life, God greatly used Pastor Jim and Mrs. Carol Cymbala to help me find a new hope in living,” explains Greene of her personal ties to the congregation. “This church family has been there for me in ways they will never realize until we get home.”

“I’ve been recording songs with The Brooklyn Tabernacle for 12 years now, and this album reflects every heartfelt moment I can recall,” Greene adds. “I hope audiences will experience what I do when I hear this music—a sound of home that calls you closer to the feet of Jesus.”

“We want to remind people that God is faithful, and His love never changes,” Cymbala says. “We pray that the new project will inspire hope instead of fear (‘I Will Not Fear,’ ‘He’s Holding You’) and deepen our faith in Jesus Christ (‘I Speak Jesus,’ ‘You Have Been Good’). The songs we’ve recorded are all based on the eternal Truth of God’s Word, which can never change or pass away.”

“It's a new season for The Brooklyn Tabernacle and I feel this project reflects that,” Cymbala concludes. “There’s a freshness to the sound but the message remains focused on Jesus and His great love. The songs and rhythms are different stylistically and the lush orchestrations greatly enhance the listening experience. I’m excited that we can present what I feel is the best project God has ever helped us to do.”

Enjoy this album now on any digital music platform HERE.

About The Brooklyn Tabernacle
One of the most revered and influential ensembles of all time, The Brooklyn Tabernacle Choir is a key architect of the modern worship movement, having garnered six GRAMMY® Awards, seven Dove Awards, and released 30 albums since its inception nearly 50 years ago. Through the years, the group's recordings have featured guest appearances from such acclaimed genre-spanning artists as Paul Baloche, Larnelle Harris, Israel Houghton, Alvin Slaughter, Shane & Shane, TaRanda Greene and Babbie Mason, among others. Under the direction of founder Carol Cymbala, The Brooklyn Tabernacle has proclaimed the Good News of the Gospel and its power to change lives on some of the world’s most prestigious stages, including the 2012 inauguration of President Barack Obama, before an estimated worldwide viewing audience of more than a billion people; Carnegie Hall; Radio City Music Hall; the Madison Square Garden Theater; and two Billy Graham Crusades.