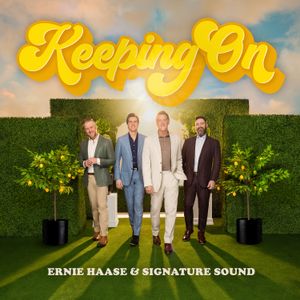 With the debut of the title track from their forthcoming album, multi-GRAMMY® nominated group Ernie Haase & Signature Sound “Keep On Keeping On.” In advance of the July 23 release via StowTown Records, fans can stream or download the first single HERE. The project, Keeping On, is also available for pre-order HERE.

The inspiration for "Keep On Keeping On" came to Haase, who wrote the song with Lee Black and Sue C. Smith over Zoom, during a dark, cold day in January. American Songwriter exclusively premiered the first listen to the encouraging track, which packs a "punch with glistening production and pounding percussion (Jason Scott)."

After nearly a year without new music or tour dates, the title led Ernie Haase & Signature Sound to return to the studio to record the full-length album. Keeping On is an offering of mostly original songs that were born in those days of testing and trusting. The 14-song album was recorded in Nashville, executive produced by Haase, and produced by Wayne Haun and Kris Crunk.

In support of Keeping On, Ernie Haase & Signature Sound are also spreading the album's message of hope across the country on the Keeping On Tour. The 30-plus city tour kicked off in Memphis on June 19. Over the July 4 weekend, the group also spent four days entertaining fans at their sold-out, 9th annual EHSS Fan Retreat in Sugarcreek, Ohio. For tickets and information on the Keeping On Tour, click HERE.

Keeping On follows Ernie Haase & Signature Sound's album Something Beautiful, a tribute to the legacy of Bill and Gloria Gaither, which received a nomination for Best Roots Gospel Album at this year's GRAMMY® Awards. This marked Haase's eighth GRAMMY® nomination individually and the group's third collective nomination. Ernie Haase & Signature Sound is also a GMA Dove Award-winning quartet, a radio favorite in the United States and internationally and a leader in CD sales and long-form music video sales with several RIAA(R)-certified Gold(R) and Platinum(R) DVDs.

5. Terminal in The Sky (Bonnie Smith)

8. Not That Far Behind You (Ernie Haase, Wayne Haun & Joel Lindsey)

10. The Ground Is Level (Beverly Lowry)

11. What He Says To Do (Devin McGlamery, Carolyn Cross & Jacklyn Huse)