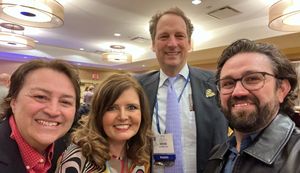 Sunday Drive was invited to perform at a Gospel Music event hosted by The Truth Network where they debuted three songs from their upcoming album, Breaking Boundaries, which is set to release on April 8 at all retail and digital music outlets worldwide. Sunday Drive enjoyed making connections and celebrating those who work to share the Gospel through various media. “It was a privilege for Sunday Drive to perform for many of the leading Christian media members at NRB 2022,” shares Dusty Treece of Sunday Drive. “We had such a fun night and thank (Founder and President) Stu Epperson, Jr., (Chief Operating Officer) Michael Carbone, and the whole staff at Truth Network for this opportunity.” The Truth Network has been an ardent supporter of Southern Gospel music for many years. 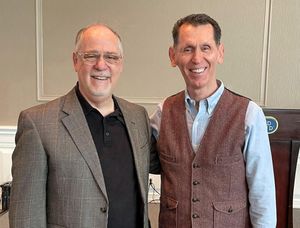 Tim Lovelace was invited to lead worship for NRB’s Friday morning service. Longtime radio personality, Bob Lepine, was the guest speaker. Tim’s musical talents and Bob’s gift of encouragement made for a beautiful worship experience for NRB attendees. NRB is the world’s largest gathering of Christian communicators and ministry professionals, and Tim was honored to be a part of this year’s event. “Many thanks to NRB for inviting me to lead worship and share the platform with Bob Lepine. With nearly 30 years of hosting ‘Family Life Today,’ Bob’s radio outreach has touched millions of lives, and I am one in that number. NRB 2022 was a super successful event, and I was grateful to work with their amazing team.” Lovelace recently released Piano Praise, Volume 1, a collection of piano solos spanning popular hymns, praise & worship songs and gospel tunes. You can download or stream this album HERE.

ABOUT SUNDAY DRIVE:
Sunday Drive is a multi-award winning group from Knoxville, TN, composed of Jeff Treece and his wife, Misty, and brother, Dusty. The group is known for their smooth harmonies and Misty’s rich, Karen Carpenter-style vocals. Having garnered multiple Vocal Group and Entertainer of the Year honors, they have performed alongside such artists as the Gaithers, Ernie Haase & Signature Sound, The Oak Ridge Boys, David Crowder and Big Daddy Weave. Sunday Drive provides a veteran entertainment and worship experience with a fresh and unique style. Their goal is to present a joyful and upbeat experience that uplifts and encourages, while taking the audience’s mind off of everyday life struggles. Whether with a three-minute song or in an entire concert, Sunday Drive strives to be a light to the world and to share the good news of their Lord and Savior, Jesus Christ.

ABOUT TIM LOVELACE:
As a Grammy and Dove nominated artist, Tim is a nationally sought-after storyteller and musician who is described as the most versatile comedian on stage today. His award-winning musical talents, coupled with his crystal clean humor, have people of all ages laughing their ribs loose! With three decades of world travel under his performance belt, he has developed his concerts into more than just a great show. He uses humor to motivate and inspire by uniquely delivering life lessons. He also has an extraordinary way of weaving songs into his stage performance as he masterfully displays his musical abilities on piano, guitar and harmonica. Tim’s chart-topping comedy songs are continuously aired on Sirius/XM Satellite Radio, as well as other major radio stations around the country. His comedy has been featured on videos that have garnered both gold and platinum sales awards. Tim has a bi-weekly podcast, Moments that Motivate, and is the host of the national TV hit, “The Music City Show,” aired weekly on five syndicated networks.