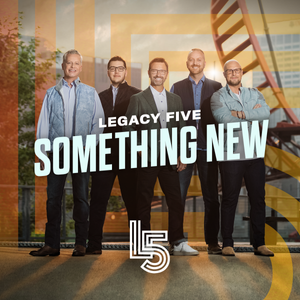 At a time in our lives when nothing seems normal, new music from our favorite artists can uplift, inspire and encourage us. Legacy Five seeks to do just that with their brand new album, Something New. With their first offering on the StowTown label, the legendary quartet continues to reinvent their delivery of the timeless message of the Gospel. Something New is available today on all digital music platforms, as well as at LegacyFive.com, Springside.com, and Amazon.

Legacy Five continues their 21-year journey with fresh wind in their sails. The four vocalists have been together for a couple of years now and their sound and camaraderie is solid. Scott Fowler, Lee Black, Bryan Walker and Matt Fouch recently added Garrett Anderson on keys. Yes, after so many years as a mainstay in Southern Gospel music, this is definitely Something New. Group owner and lead vocalist Scott Fowler acknowledges that this album is a significant part of Legacy Five’s story. “As Legacy Five approaches our 22nd year in gospel music, we find our professional journey embarking on Something New, not the least of which is partnering with StowTown Records. StowTown has become a symbol of excellence and integrity, and we are very honored they have invited us to be a small part of their amazing family of artists. This project is a fantastic way to start Something New as we partner in ministry with StowTown!”

StowTown Records President Landon Beene shares, “This project is appropriately titled Something New. Although Legacy Five has been at the top of their game for years, they have managed to reinvent themselves through this project with an incredible new sound of quartet harmony unlike anyone has heard before.” For this kind of achievement, an artist has to fully trust their producers. Wayne Haun and Gordon Mote create a dynamic production team, each bringing years of musical expertise to this project. Sonically, they’ve pushed Legacy Five to the next level, not settling for less than their best. After the success of their previous release, Pure Love, which garnered the GMA Dove Award for Southern Gospel Album of the Year, this project  continues the forward momentum that success brought.

With the first track, “Welcome To Your Life,” the listener is drawn in as if during the hero’s adventure sequence in a movie. A full orchestra and big harmonies make this song truly inviting and exciting.  Staying true to their musical roots, there are a variety of traditional Southern Gospel and Country-flavored tunes which are sure to be fan favorites. But a stunningly simple, yet poignant moment on the album may be a surprise to some. “Jesus Wept” brings current events, historical events and personal moments all together under one umbrella: Jesus wept for all of us out of His deep love for us. It’s as if Scott Fowler is giving a sermon in one song. “Given, Buried, Risen,” the first radio single, was released on digital platforms last week and is quickly becoming another Legacy Five hit song. With twelve tracks on the album, Legacy Five fans will be thrilled with the variety of songs on Something New.

Something New is distributed digitally by Provident/Sony and is available worldwide on all digital music platforms HERE.

ABOUT LEGACY FIVE:
When the Legendary Cathedral Quartet retired in December of 1999, Scott Fowler and Roger Bennett decided to continue the rich musical tradition of Southern Gospel Quartet singing. Legacy Five was organized and had their official debut in January 2000 in Atlanta, Georgia. Since that day, they have made a major mark on the Southern Gospel Music world. Legacy Five has received over 90 Singing News fan awards nominations and multiple GMA Dove Award nominations. Their project, Pure Love, was the winner of the 2020 Dove Award for Southern Gospel Album of the Year. Viewers across America have seen Legacy Five on TNN, TBN, Sky Angel, INSP, GMT, The Odyssey Network and a host of local channels on programs such as Gaither and Friends Homecoming, In Touch with Dr. Charles Stanley and on Dr. David Jeremiah’s Turning Point in El Cajon, CA. The rich four and five part harmony for which Legacy Five has become known is the result of a masterful weaving together of five unique and versatile talents. Legacy Five consists of Scott Fowler (lead), Lee Black (tenor), Bryan Walker (baritone), Matt Fouch (bass) and Garrett Anderson (keys).