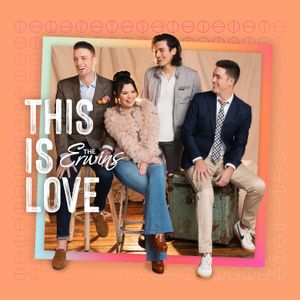 With their highly anticipated eighth career recording, This Is Love, now available, GRAMMY®-nominated, Dove Award-winning StowTown Records recording artist The Erwins are also celebrating the launch of the album’s debut single, “The God I Know.” Impacting radio today, the inspirational ballad heralds the One who still moves mountains and calms the raging sea, carrying the project’s central message of Christ’s unwavering sustainment.

Infusing The Erwins’ signature family harmonies and modern musical influences across all eight selections, This Is Love also features such standout tracks as lead digital single “All Of My Help”; the bluesy, brass-studded “Already On His Way God”; and the pop/country ballad “The Blood of Jesus.” Produced and arranged by Wayne Haun (Jason Crabb, Ernie Haase & Signature Sound), the album showcases tracks penned by such top songwriters as Kenna Turner West, Sue Smith and Tony Wood, among others.

In support of This Is Love, The Erwins appeared on CBN News’ March 31 broadcast of “Studio 5,” chatting with host Efrem Graham about the album as well as their GRAMMY® Award nomination. The siblings are also featured guests on Worship Leader magazine’s latest podcast, discussing family ministry and presenting a special a cappella song.

Additionally, The Erwins recently marked a career milestone as they joined the world-renowned Fisk Jubilee Singers for an exclusive performance celebrating both groups’ 2021 GRAMMY® Award nominations for Best Roots Gospel Album. The genre-bridging ensembles were invited to collaborate on renditions of the Fisk Jubilee Singers’ “Wade in the Water” and The Erwins’ “Watch and See” for Singing News magazine.

The Erwins are set to debut selections from This Is Love in concert on Friday, April 16 at First Baptist Church in Canton, Texas. The album release show follows last night’s digital launch party, with the group taking to Facebook Live to chat about their new music while autographing This Is Love pre-orders for fans.

Keith, Kody, Kris and Katie Erwin have been singing together their entire lives. They grew up performing in countless churches and at events around the country with their parents, who have served as full-time evangelists for more than 40 years. The group’s 2011 debut, What Really Matters, featured the Erwin brothers, with Katie officially joining the lineup later that year on the follow-up project, Jesus In A Song.

In the decade since, The Erwins have released six subsequent recordings, as well as the 2021 GRAMMY®-nominated project, What Christmas Really Means. They earned a 2020 Dove Award for Southern Gospel Recorded Song of the Year for “The Power Of An Empty Tomb,” and The Erwins have been featured on various multi-artist collaborations, including Fanny Crosby: Newly Discovered Hymns and Songs, a StowTown Records release showcasing selections by Jason Crabb, Ernie Haase & Signature Sound, The Collingsworth Family, Charles Billingsley and Rhonda Vincent, among others.